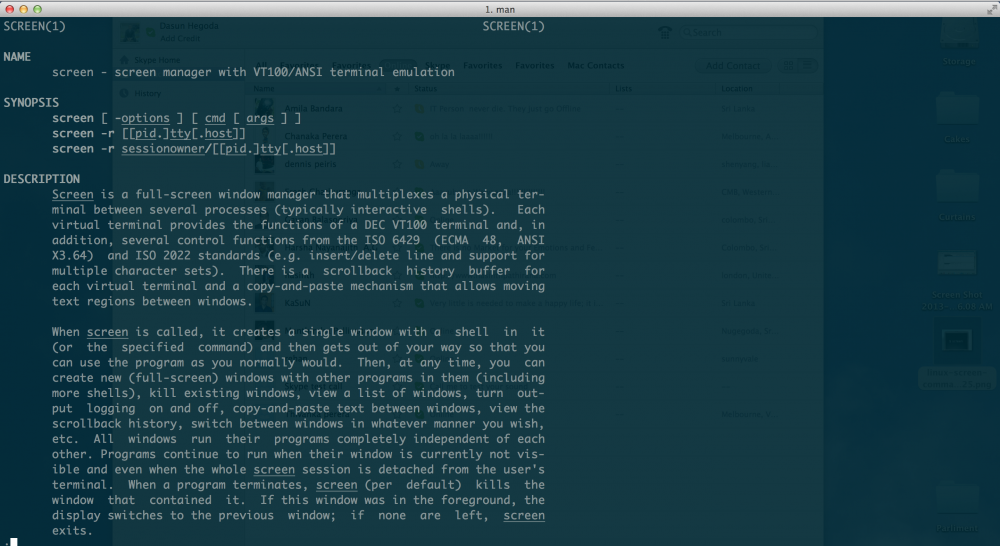 Hey techies! How’s it going? I couldn’t share a blog post on unix for a while. So I thought of writing one for you guys and you are going to love it(wink-face). Do you know what we are going to talk about? Today we are going to talk about “Screen“(excited-face). The screen command works on both unix based operating systems such as linux, mac. Brace yourself mac/linux lovers. It’s a very useful command. I’m sure once you learn it, you are gonna use it everyday. We’ll start with the basics. Then we’ll dive into some command line examples as well. Are you ready? here we go(happy-face).

Screen is a full-screen window manager that multiplexes a physical terminal between several processes (typically interactive shells). Each virtual terminal provides the functions of a DEC VT100 terminal and, in addition, several control functions from the ISO 6429 (ECMA 48, ANSI X3.64) and ISO 2022 standards (e.g. insert/delete line and support for multiple character sets).

That’s what man page says but I would like to describe it in plain english so that everyone can understand what it is. It’s like this. The screen program allows you to use multiple windows in Unix. In other words the screen command lets you detach from a terminal session and then attach it back at a later time. To be able to do that you should be in a screen session. Just using the terminal won’t let you do that. Best part is even when you are detached from the terminal session, the process that was originally started under the screen session is still running and managed by the screen. You can reattach to the particular screen session at a later time when you need to and your terminals are still there, the way you left them. You got nothing to worry about(happy-face).

How to install the screen command(only not exists)?

When to use the screen command?

This is a very interesting part before we jump into how to use it. Knowing the commands won’t help you if you don’t apply them in your work to get the work done effectively and efficiently. That’s why I’m here to teach you. You might find the screen command helpful in many cases. Here is my list. By the way if you are already using the screen command and if your way of using the screen command is not in the list below, don’t forget to tell me in the comments below.

How to use the screen command?

Okay it’s that moment you have been waiting for. How to use?(excited-face) This is what we are going to do. I’ll teach you the basics. If you are interested you can find out about the screen command more. Let’s get our hands dirty. I mean start using the screen command(laugh-face). Note that you are on a mac you will have to use control key instead of ctrl key.

Detach from a screen session

Reattach to a screen session

How to scroll up in a screen

When you are in a screen you can’t scroll up like in the command line. To be able to scroll you have to follow below steps.

Press the “Up” and “Down” arrow keys or the “Page Up” and “Page Down” keys to scroll through the output.

Below will show all the screen key bindings. You don’t have to remember a thing.

Hello! I'm Dasun Hegoda, a Technical Lead at ICTA, Sri Lanka. I would like to call myself a techie who lives in the cyberspace.

This site uses Akismet to reduce spam. Learn how your comment data is processed.